Are you an emotional collector? I choose the word collector carefully because I think when we hear the words “emotional hoarder,” it makes us think of the extreme. There are many of us who are not extreme, just collectors.

So, who is an emotional collector?

Me. I was an emotional collector. 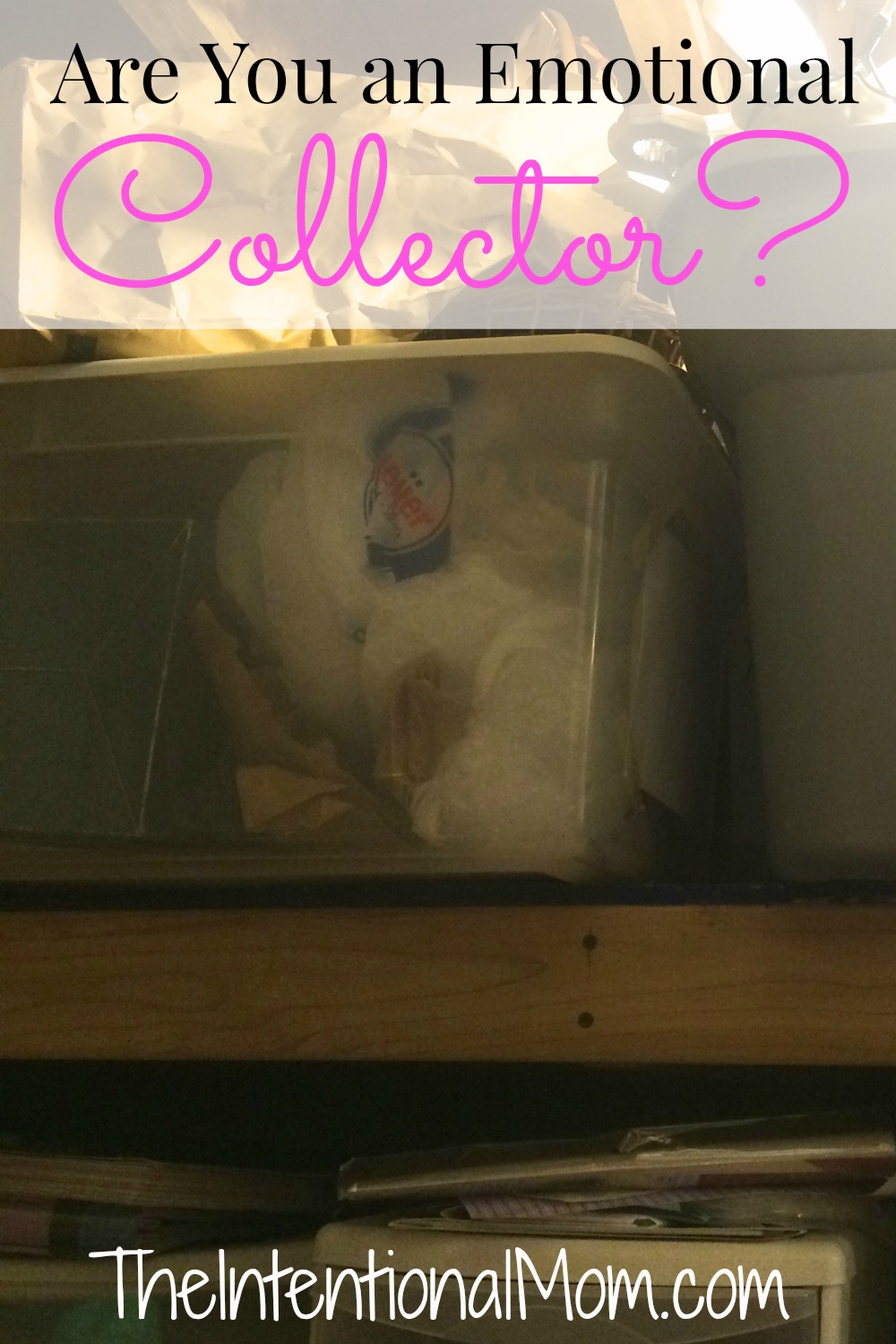 While taking this 31 day journey of living well spending less, we have been focused on decluttering lately. But what if this has been really hard for you? What if decluttering is something that just gets you stuck?

Sometimes it could be a shirt that was hard for me to let go of. It was a shirt that I hadn’t worn in years, but because it was the shirt that I wore when I took a baby home from the hospital in, I was emotionally tied to it.

Then there are all the things our kids make. They make us cards, pictures, and then there are the art things they come home from school with. These things can be so hard for us to get rid of.

There have also been times that I have needed to get rid of something that was difficult to let go of because it was purchased during a momental time in our life. I wrote some about this time in this post, Sometimes You Have to Sift Through the Dirt to Find the Gems as well as in Lessons Learned While in a Financial Valley. Because anything, even a $5 item, that was purchased during this time was something that was saved up for over a long period in time, there are such strong emotional ties connected to it. This makes it very hard for me to get rid of anything that we purchased during that time of great financial hardship.

So, if you have a hard time letting go of things for some reason or another, know that you are in good company. Namely, mine.

Getting rid of things that aren’t needed or aren’t meeting our needs anymore is a good thing, though, and it is important that we find a way to let go. Here are the steps I take to help me process through letting go of special things. Yes, it is a process, but it has been an amazing one. I have been able to get rid of much needed things by following these steps through.

Identify that you are an emotional collector and own that

Realizing that you hang on to things unnecessarily is the first step.

Give yourself permission to let go of these things

Chances are, if your child was given a toy by a grandparent, they would not expect or want you to hang on to it if it was broken beyond repair. If your sister gave you a shirt that is just not your style, she would most likely rather have you sell that shirt or bless someone else through a donation. The money you earn can be used to buy a shirt that is your style.

If you struggle with feeling as though you are dishonoring them, a simple note can be just the thing you need to let those emotions go – and you are blessing them, too!

Honor the memory of the items you are getting rid of

If you are a sentimental person like I am, it can be especially hard to let go of things that have become clutter. Recognizing that you are an emotional collector and then finding ways that help you work through the process of letting things go is essential. Try some of the things that help me, or, find ways that help you get through it. You will be so glad to clear out your home and your emotions at the same time. It really is an incredibly freeing process.

« Want to Live for a Thousand Years?
Inspirational Quote »

I cannot wait to hang this beautiful creation from

People often wonder how I can homeschool 9 kids, r