First, let’s talk about why the kitchen counters are most likely a problem area for clutter in your home.

The kitchen is the busiest room in the house

Let’s face it, people eat. And if your home is like mine, they eat often. Just when you get done with a meal someone is complaining that they’re hungry. And in my home, that might even be me. I have a hard time eating with the family since I am always so busy getting people what they need that I am often left actually eating most of my meal after the meal is actually done for everyone else.

Wait! Before you go any further, be sure to enter your email to have our decluttering questions sent right to your inbox. It is the perfect tool to use when wondering what to keep and what to get rid of. Get instant access below.

Download & print these questions to get your decluttering underway!

Success! Now check your email to grab your download & grab some other free stuff!

The kitchen is often centrally located

Because the kitchen is often a central area, things naturally get dropped there that don’t actually belong there.

Kitchen counters are like an open invitation that screams, “Put stuff here!”

There are several other reasons that you deal with kitchen counter organization issues, but these are just three to get you started.

Now, let’s talk about what you need to do to never struggle with kitchen counter clutter again! 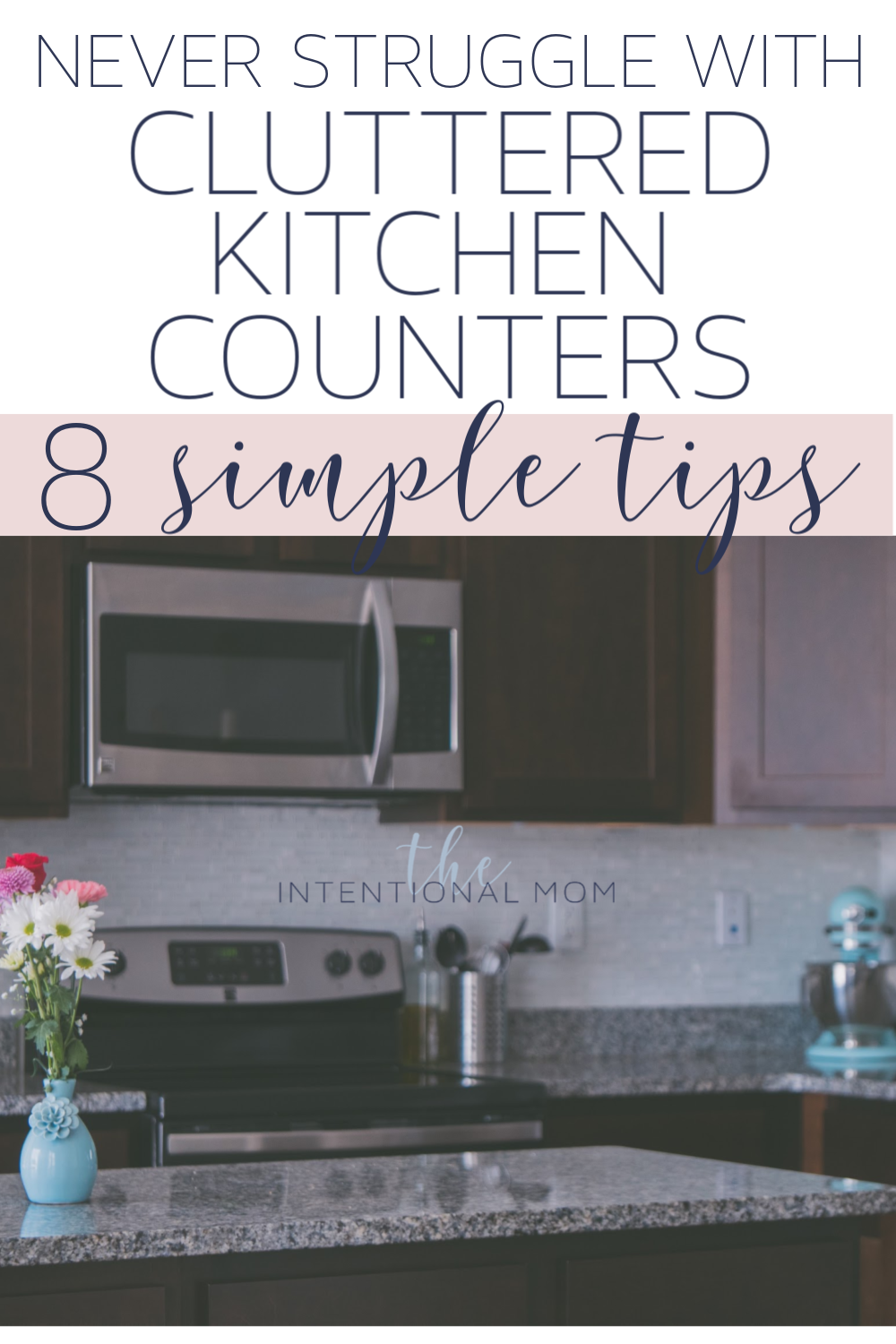 1. Determine the reasons your kitchen counters are a clutter problem

Like most issues, knowing the root of the problem can help you solve it. I shared three of the most common reasons above. Start by reading those reasons and seeing if they apply in your home. Then, take note over the next few days as clutter collects on your kitchen counters and ask why the clutter is collecting there.

2. Have fewer things on your kitchen counters

The key to having kitchen counters that are organized and clutter free starts with having less clutter to begin with. This means to have less small appliances. Have less decorations. Have less stuff in general. I suggest only having three things on your kitchen counters. That’s it.

Do this by deciding which three things you use daily and use the most.

For instance, we don’t use our toaster oven every day. But, it is one of the three things I keep on my kitchen counters because it is too large to store anywhere else. 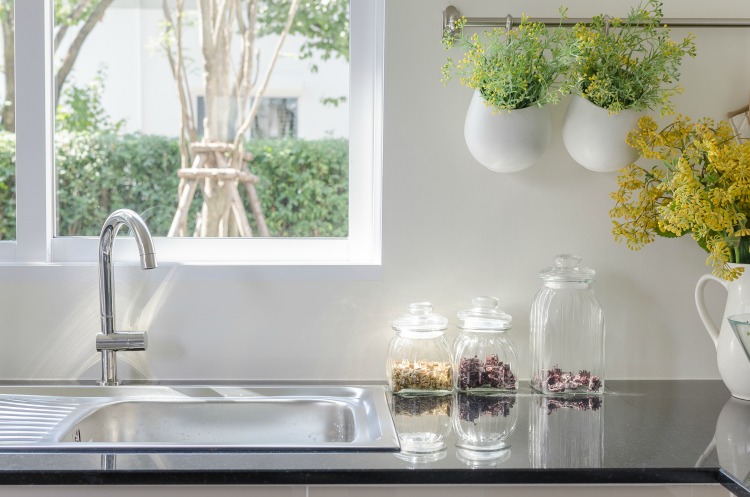 In addition to my toaster oven, I keep out my mixer and my knife set.

Those are my three things.

Choose your three things wisely and find a place for the rest.

3. Have a place for kitchen clutter to go

Let’s be real. Clutter will collect on your kitchen counters because, it will. Oftentimes the mail is a common clutter problem.

This can be overcome by having a designated place to put the mail that is NOT the kitchen counter.

It could also be that random papers collect on the kitchen counter. This is the case in my home. For this reason, I have a cute magazine file like this one on a desk in my office that I can quickly and easily take the papers from the kitchen counter and put inside. 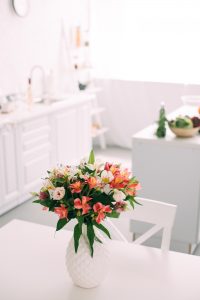 Staying on top of the clutter that collects on your kitchen counters (or anyplace else) is key. I like making sure that I declutter my kitchen counters while I’m cooking each of the three meals. While I’m in the kitchen anyway, I can take just a few extra minutes to make sure that the counters stay clutter free.

Being proactive is always good.

If you’ve never done this before, I assure you that the one-touch rule will be your best friend.

It also states that really, you should take care of everything once you touch it. This also means that if you can’t take care of something in that moment, leave it alone.

The mail is a perfect example. Don’t bring the mail in if you aren’t going to take care of it right then and there.

Laundry. Don’t empty the dryer if you don’t have the time to fold laundry right then.

The one-touch rule states that you touch something once and then are done with it. It just requires that you plan accordingly.

Out of all these kitchen counter clutter tips, this one has the most power to really change your life. 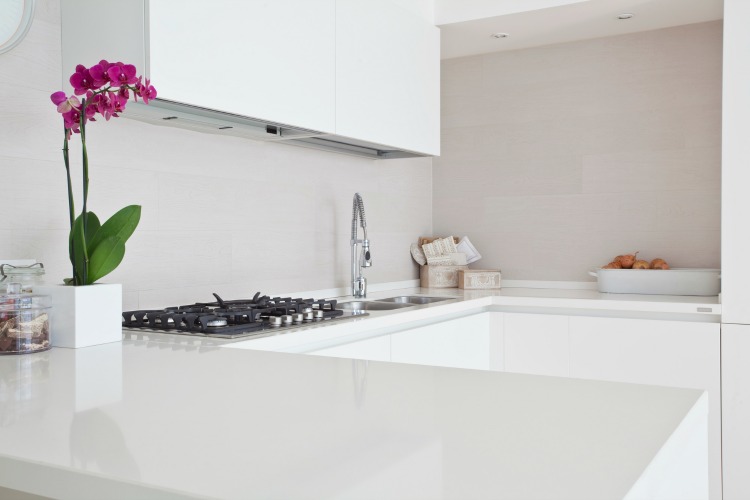 6. Multi-task in the kitchen

Multitasking is beneficial for so many reasons including when it comes to having kitchen counters that are clean and organized.

The less often you make a mess, the less mess you have to clean.

For instance. Make more than one meal at a time. If you’re in the kitchen making breakfast anyway, you could also be chopping some vegetables for dinner. 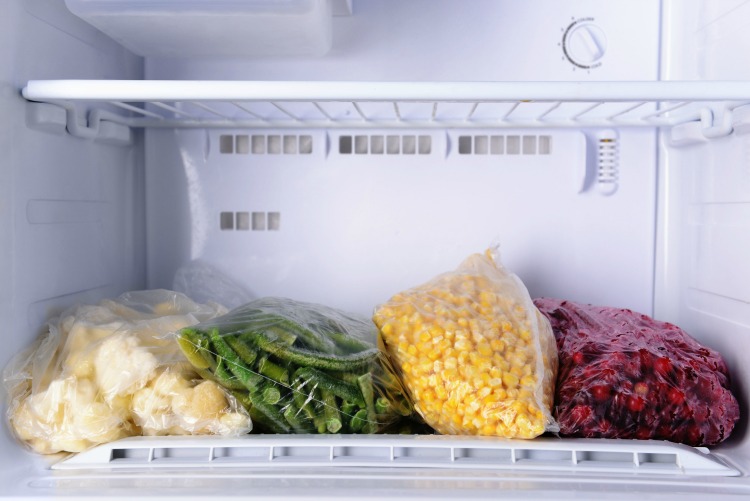 I stock my freezer primarily by multi-tasking in the kitchen.

Multitasking in the kitchen will save you clutter mess on your kitchen countertops.

7. Don’t keep things you don’t use

For whatever reason, getting rid of stuff is hard for many of us. Sometimes we receive things as gifts. It could be that these things hold sentimental value. Maybe they serve an occasional purpose. Whatever it is, we have reasons why we hang on to things we don’t use.

But, we need to stop!

This is where the decluttering questions that I mentioned HERE become worth their weight in gold.

If things aren’t serving you and making a positive impact in your life, it’s time to get rid of them. It’s just stuff, after all. If you’re keeping things you don’t use, I can almost promise you that the are becoming clutter on your kitchen counters.

8. Train the people who use the kitchen

Trying to keep your kitchen counters organized and free of clutter is going to be an uphill battle if there are other people in your kitchen.

But at the same time, we can’t expect these people to keep the kitchen counters neat and organized if we aren’t teaching them how to do that.

Teach the people who use your kitchen where things go, teach them the one-touch rule, and show them where to put things that often clutter your counters.

In my case, I have shown my kids where to put their school papers. I’ve shown them where to put the mail. Furthermore, they know not to get the mail without asking since I don’t want the mail brought in until I can deal with it right then and there.

Getting the people in your family to help you keep your kitchen clean, organized, and without clutter is essential to keeping your kitchen counters that way.

If you find yourself wondering how to stay on top of kitchen clutter or how to organize your kitchen counters, these are the 8 simple things you can do to put an end to all the mess and stress.

If I must have winter, at least I live in the wood

Took the tree down today. It will be making the go

My favorite Christmas gift. One of my daughters ha