Have you lived through a time when the money just isn’t there? Perhaps you find yourself there right now. Maybe right now you are in a place where you have no money at all.

You could be nearing the end of yet another month and have no idea how you’re going to make it all work. Mostly, you know that it won’t work. So, you just hope for the best and know that you’ll be worrying about it when you have to and not one moment sooner.

Before you go any further, you need to grab a copy of my monthly budget when our family of 10 survived on less than $25,000 a year. It IS possible! Just enter you email below to get a copy along with blank budget worksheets for you to create your own budget!

Enter you email below to grab your worksheets & subscribe to receive other awesome freebies as well!

Success! Now check your email to grab your downloads and confirm your email address.

If any of this resonates with you, let me encourage you to keep reading. If the money just isn’t there, read on. 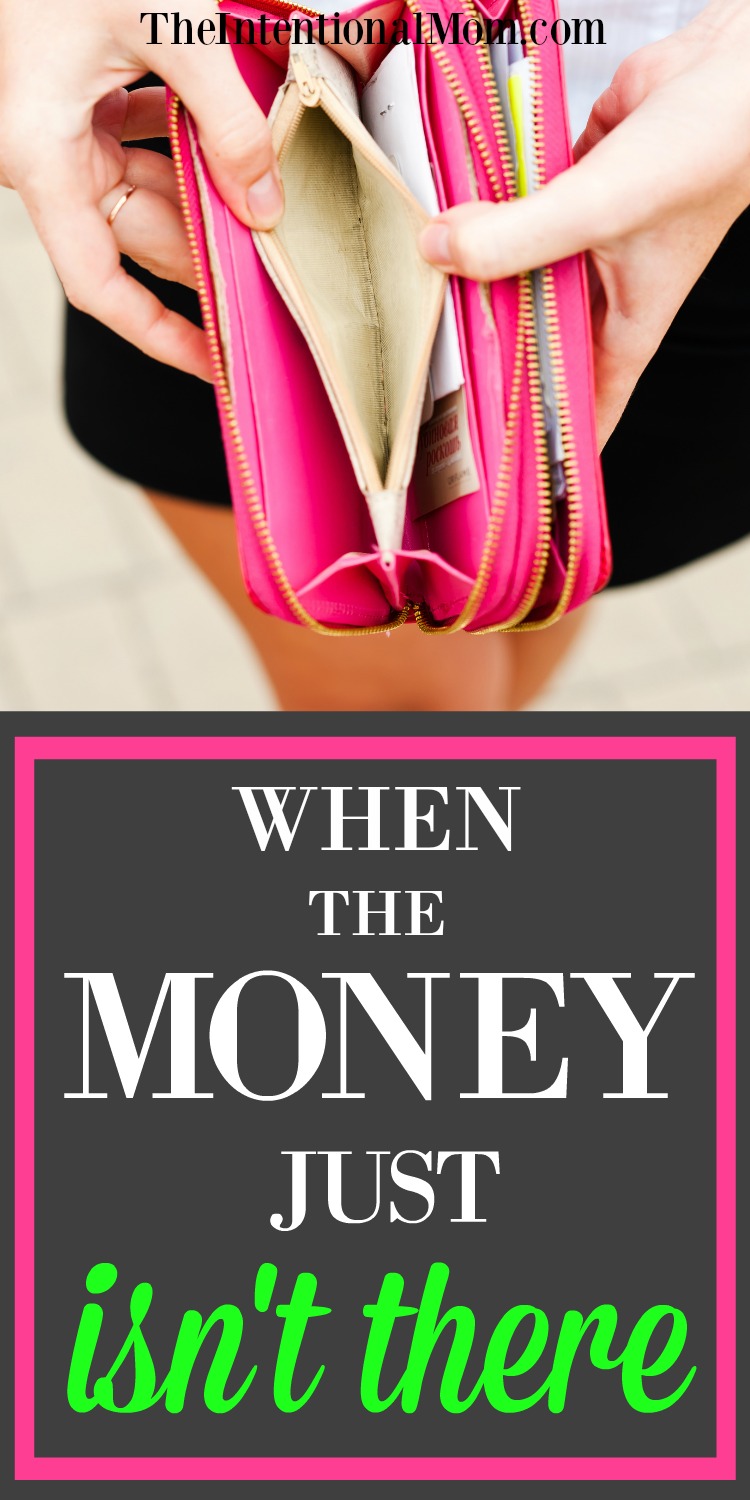 Let me clarify something with you right off the bat. If you are looking for money saving tips that may help during a financial valley in your life, I have so many posts under the frugal tab along the top here on my site that can help with that. In fact, my whole book, How to Be Frugal, is an unpacking of my brain regarding the lessons, tips, tricks, and tools I learned over 20 years of living frugally.

If this information is what you are looking for, this is not the post where you will find that kind of information.

For several years of our married life, which is now more than 20 years, my husband and I earned a very good living, and we enjoyed a comfortable lifestyle because of it. While we have always lived frugally, even extremely frugally according to the standards that most people have, our lifestyle, our security, and our future was more than comfortable.

During these times we said no to many luxuries and niceties, but it was completely by choice because we were focused on getting out of debt and being good stewards of the money we had while also supporting a super-sized family that was continually growing.

We had good paying jobs and a steady income stream that was more than sufficient.

Without warning the rug was pulled out from underneath us and in the blink of an eye, the money was just not there.

Have you been there? Are you there?

During this time in my life I felt:

Or at times, I didn’t really even feel like I was living at all. I felt as though I was just surviving. I was only breathing.

If you have been here before, or if you are there now, let me tell you, I understand.

I, too, have felt that overwhelming despair, that ache in the pit of your stomach, and that sense of panic and dread that is like a noose around your neck, keeping you from ever feeling like you can catch your breath.

During this time in my life well meaning people said things to me that they had no idea were literally ripping my insides out. Not in any way on purpose, but things were said that were just a part of their daily life that was light years away from my reality….and no one knew of the reality I actually lived in. I didn’t want anyone to know, really. I think it was all just part of a self-protection mechanism.

Every day, all day long, I couldn’t get out from underneath the weight of my reality, and it was all-consuming. I was constantly reminded, day in and day out, that I was on the outside looking in regarding absolutely everything.

These things and so many more were part of the reality I faced every day:

There are countless other stories that I could share to illustrate the extreme despair that I felt during this time, but my desire is to offer you an understanding ear.

If I could, I would offer you a seat on my couch and tell you that you aren’t alone, even though it feels like you are.

If you were here I’d tell you that it’s ok to let the tears fall sometime.

I would tell you that sometimes that pit in your stomach simply won’t go away.

I would tell you that I know what it’s like to be given the once over when the person at the pharmacy processes your Medicaid card.

I would tell you that I know what it’s like to be completely misjudged and misconstrued by the woman in line behind you, who looks an awful lot like your former self, when she sees you whip out your WIC card to pay for the groceries on the belt in front of you.

I would tell you that I know what it’s like to want to explain your story to the person who tells you that your food benefits have run out for the month when you thought you had a little left…but yet you know they wouldn’t really hear you anyway.

I would tell you that most people you meet aren’t really interested in hearing about the situations in your life that brought you to the welfare line…they would just rather assume that they know who you are and why you’re there. Most people would rather just assume that you are where you are because you are lazy, lacking, or just interested in getting something for free.

The interesting thing is that while others see you as getting things for “free,” they have no idea of the price you are actually paying for your “free” benefits.

You are paying for your free benefits with your very soul.

While I wouldn’t trade the lessons that I learned during times of hardship, I would tell you that these times of hardship were not fun times to live through. I would have given anything to not be in that place when the money wasn’t there, but this was just not to be.

My purpose is just to sit here with you, grab your hand, and let the tears fall along with yours.

If you are living through a time when the money just isn’t there, that’s what I hope I’ve done for you.

Are you looking for more encouragement?

Sometimes You Have to Sift Through the Dirt to Find the Gems,

3 Things That Can Turn Your Life Around,

When Someone Else is Living Your Dream,

How You Can Move That Mountain,

Five Truths to Cling to When the Days Are Painfully Hard,

How to Keep Going in the Midst of Hard Times

Did you know January 21st has been said to be the

Still my favorite room in the house. I know someda

If you know me well, you would know that I did NOT

The cat is practicing his shapes and colors while

When people hear how much I spend on groceries, ($