My husband and I debated about giving up cable long before we ever did. We were so tired of paying for it, And, since we don’t watch much television anyway, it was an expense that really wasn’t worth it. It got to the point where the stress and time involved in paying attention to the rates all the time and when the prices would be going up also made the decision to give up cable a simple one.

There are so many things in your budget that can’t be altered. But when funds are tight, there are almost always things that can be adjusted in some way. Cable was one of them for us.

Need help with a budget? Be sure to join my FREE 10 day budget boot camp to have the step by step instruction you need to create your budget. Enter your email below to get started!

Fill in your email to get started!

In the end, getting rid of cable was one of the best decisions we ever made.

Here’s how we got rid of cable and how you can do it too! 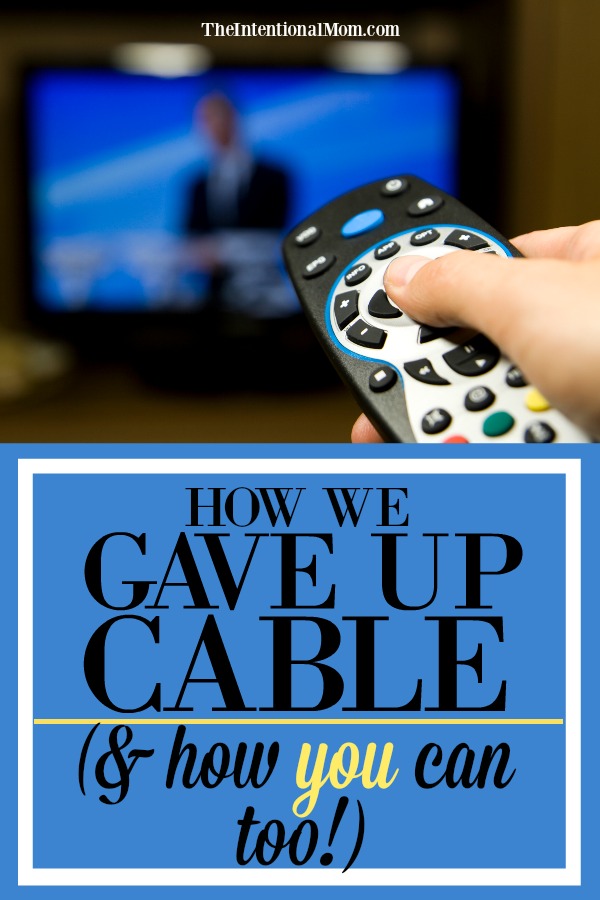 (this post contains affiliate links. If you make a purchase, I may receive a small commission at no cost to you)

Although it was a decision we were sure of in the end, there were a couple of main concerns. This is what held me back for so long. Way longer than it should have.

The first concern, was what to do about sports. My husband enjoys watching sports, when he can at least. For us, we are in a season where this is a bit less important since my husband is working full time and going to school full time. When I approached him with the idea of quitting cable at this time, he agreed that he didn’t have much time for watching sports anyway.

The second concern was more my deal, since I enjoyed watching news channels after the kids got in bed at night. I didn’t so much watch them as they were just on in the background. At times I would pay attention to something that piqued my interest.

These were really the only two concerns we had. As a general whole, unless the tv was getting used for these two things, it wasn’t really getting used much at all. The kids, especially the littles, have DVDs that they like at times.

So, this is how giving up cable looked for us.

We figured out what to stream with

to use for streaming in our main living area. There are many other devices you can purchase to stream from, but I do like the added channels that you get with a Roku.

We also needed something to stream with in our bedroom

My husband often works nights, so a tv in the bedroom is a must for him to drown out all the crazy noise he has to sleep through in the day.

In our bedroom, we bought a Fire TV Stick

We love Amazon Prime for steaming

We already had Amazon Prime for the free shipping benefits. Now, we just began using it for the streaming benefits, too.

You can find out more about Amazon Prime below, and right now it’s just $5.99 a month!
Prime Discounted Monthly Offering

I actually like this feature better than anything on tv since there are more shows that my little kids actually watch than we were ever able to find on cable television. My now three year old son loves Daniel Tiger. There are more than enough episodes to choose from. From there, my older kids can always find something if they have a free moment, which seems to rarely happen.

We may add in Netflix if we get to the point where we want more options for movies and shows. For now, the Prime is working fine for us.  It also nice to have these streaming options to use on phones and tablets as we want, too. There are other streaming services that may be a better option for you. However, nearly all of them can be streamed on a Roku.

Here’s how we get local channels

For local channels, we bought a leaf antenna, again after researching various options. I read good reviews about this one, Mohu Leaf 50 Amplified Indoor HDTV Antenna – Made in USA with Premium Cables, Premium Connectors and Premium Materials

and it has worked well. We are able to get about 20 local channels including a couple classic stations with shows like Mister Ed. My kids find so much fun to watch.

Many of the sports my husband enjoys watching are found on local channel. If there is something he really wants to see that we don’t get, he can either find someone’s house to watch it at or head to a sports bar. Even if he does this a few times a year and orders food, we still come out way ahead.

In summary, the thought of giving up cable was much scarier to think about than it was to actually do it. We only had a bare minimum package plan at $40 a month, but with the savings we have an extra $480 a month to spend on something else or to save. Not only do we benefit financially, but we also benefit relationally as we spend even more time doing other things since we are even less focused on the tv than we were before.

« Make This Your Best Year Yet (New Year’s Resolutions That Work!)
You Can Have a Clutter Free Home! – Free Strategy Guide »