Sometimes, trying to teach kids to tie can be so frustrating! With eight kids who are all different, this has proven to be more difficult with some. I think this largely depends on the temperament of each child (and how much patience we as moms have at the time!). But it really is possible to go from tears to tying in a flash!

Last night I bought a few of my kids new shoes, but it wasn’t until I got home that I realized I had a problem (he wasn’t with my when I bought them) because he burst into tears. Why?

I had forgotten that he had been over the top frustrated with tying his shoes whenever we had worked with him on it…and he still had basically no idea how to do it.

And of course, the shoes that I bought him had…laces!

With eight kids, the last thing we have time for is having to tie shoes for kids who are over five since we always have at least three who are under five. This means that we needed to get this problem taken care of STAT!

So, I was determined to figure out how to make this easier for him.

We had done the bunny ears thing and the put the rabbit around the bush and into the hole thing before, but clearly this hadn’t worked out well.

This is how I figured out how to teach kids to tie without tears. 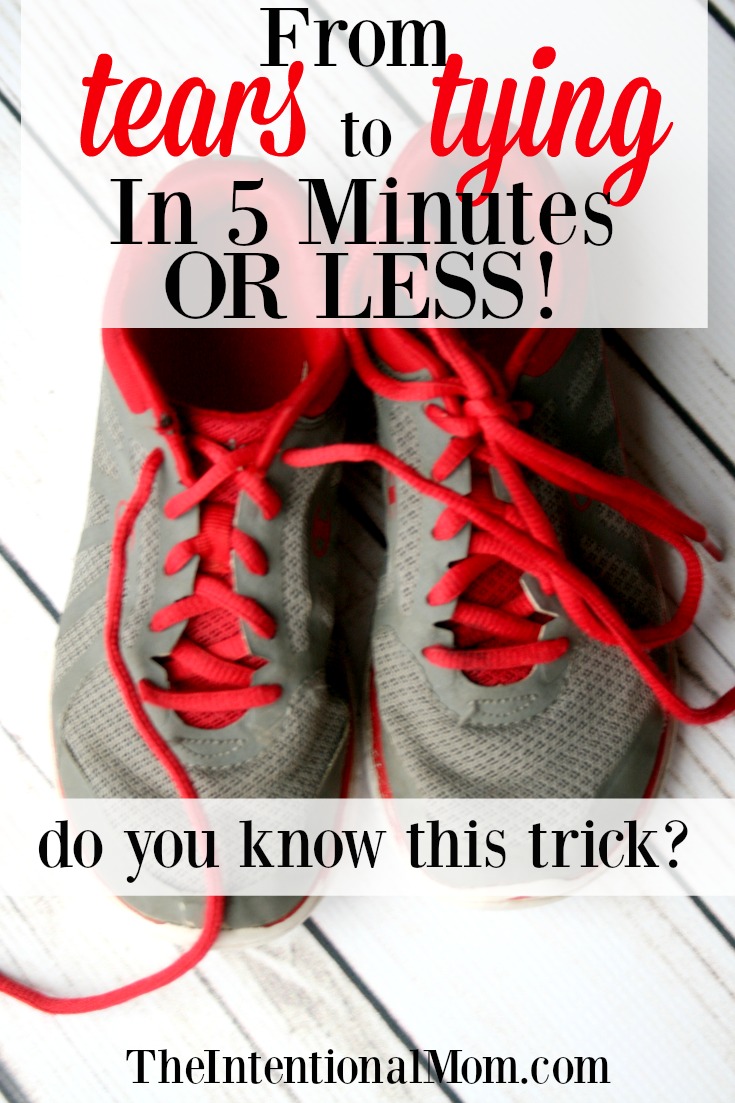 I actually started by working backwards, and it was in slowly untying my shoes that I saw how easy it really could be.

I have no idea what took me so long to figure this out! My oldest four kids would have had it so easy. Well, I guess it’s all part of being the guinea pigs, right?

What makes this method so easy is that they only have to learn the first part of tying a shoe and then basically just repeat it for a second time.

Once they’ve done that, they can clearly SEE what to pull to tighten the shoelace into place.

Then it was time to try it with my kid.

I demonstrated how to do it once. Did it along with him once. And, on his first time trying it alone…voila!

This boy was beyond excited!!!

Guess what he did for the rest of the night!!!

You can watch a video on how to teach your kids right HERE!