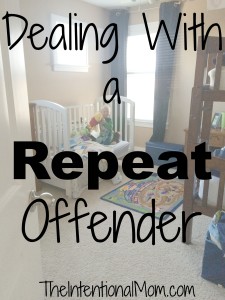 I ended up tackling an extra spring cleaning project on the fly since my sons’ room had become a disaster area for multiple reasons. My oldest son is challenged when it comes to keeping things picked up, and he is a repeat offender several times over. A repeat offender to me is someone who has been asked to make changes, and continues to do the opposite.

If you have a child like this, I am wondering if what I have done may help you, too. Since I have three boys in one room right now, it doesn’t take long for the room to look like a war zone.

As far as bedrooms go, we only allow minimal toys in their bedroom since we have an entire basement for a toy room not to mention the areas in the living room with toys, too. The kids do have a few toy items, but it is mainly books in their room. Lots of books.

So my oldest son, who basically refuses to keep his room picked up on a regular basis, had been given everything he needs to keep organized with a place to put everything, which is the first step. I know I can’t expect him to keep things picked up if he doesn’t have someplace to put them or know how to put them there so they fit.

Over time, I have been pulling more and more things out of his room so that he has less to manage. He actually has found that he appreciates this since he values having less to pick up more than he values having easy access to everything he owns (maybe that tells me that he has too much stuff?) I just throw his stuff in some storage bins so he can get it out, but he would need to put other things back in then.

Even this had not helped him enough, so, yesterday nearly everything came out.

Have you ever taken a bunch of your kids’ things away?

He is left with no toys, no books, and seven items of clothes to get him through the week in his room. The nice part is that his brothers, who share the room, finally have someplace to put their things. Their room is clean, organized, and picked up with little chance of it being a mess again since there is little to make a mess with. My younger two boys do an excellent job of picking up after themselves. 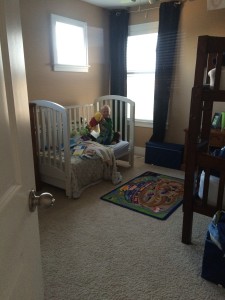 As I mentioned before, my oldest doesn’t really mind too much, although he is not a fan of being left with nothing. However, since he was warned and chose to not heed that warning, here he is with just his bed and a few of his clothes. My plan is that over time he will gradually get some of his stuff back. Maybe this way it will finally be manageable for him. But these things won’t be free, he will need to earn them through hard labor or cash.

In the meantime, my younger boys are loving having a clean room!

Ready for spring and choosing to ignore the snow o

Am I the only one who likes the visuals of sticky